We as coaches want our members to know that MATPAC Wrestling is for the serious wrestler and we will focus on teaching the fundamentals of wrestling, sportsmanship, hard work, and teamwork. Scholarships are available to qualified families.

All practices are in the BHS wrestling room (enter through the Ave. D and 8th St. doors).

Coached at Minot High, UND and is currently the BHS Co-head Coach since 1997.

Jeff is a member of the ND Wrestling Hall of-Fame and a recipient of the 2011 Lefty Farris Award which is awarded to the person in ND that demonstrates the most support of USAWND wrestling.

Adam was a 2x state champion for BHS and a long time MATPAC alumni.

2016-17: Finished season with 17-11 record after starting at 174 pounds…went 2-2 at Super Region 3 tournament, beating Carlos Toledano of Minot State in first round and Tyler Harrington in Maryville…finished third at Bison Open…went 3-1 at Vegas Duals.

High School: Two-time North Dakota Class A state champion, winning at 160 pounds in 2015 after title at 145 pounds in 2014…five-time state place winner…finished second in the state at 120 pounds as a sophomore…finished 42-3 as a senior and finished with 169-55 career record…ranked as #24 Best Senior by Wrestling USA Magazine.

2018-19: NCAA qualifier … Went 17-16 and 7-7 in duals … Went 1-2 at the NCAA Championships … Defeated seventh-seeded Kaden Gfeller (Oklahoma State) in the first round of NCAAs by a 5-1 decision in sudden victory … Narrowly fell to Pat Lugo (Iowa) in sudden victory two by a 4-2 decision … Went 2-2 at the ACC Championship with a 2-0 decision over Michael Murphy (Virginia) and a 17-0 tech fall over Dallas Bulsak (Pitt) … Defeated Lehigh’s Cortlandt Schuyler by an 8-3 decision … Went 3-0 at the Virginia Duals … Beat Cornell’s Rob Koll by a 9-6 decision.

2017-18: NCAA qualifier … VaSID All-State first team ... Earned the No. 12 seed at the NCAA Championships … Went 1-2 at nationals … Defeated American’s Michael Sprague, 4-3, in TB-1 in the first round … Went 20-6 during the regular season … Two-time ACC Wrestler of the Week (Jan. 30, Feb. 6) … Finished second at his first ACC tournament where he went 2-1 as the No. 3 seed … Registered a 16-4 major decision over Duke’s Brandon Laynaud in the quarterfinals and avenged a regular season loss to NC State’s Beau Donahue, the No. 2 seed, by claiming a 6-4 decision in the semis … Knocked off No. 6 Troy Heilmann of North Carolina, 3-1, in sudden victory overtime during the regular season … Picked up three straight bonus point wins in duals against Edinboro’s Peter Pappas, Lehigh’s Jonathan Mele and Duke’s Brandon Laynaud … Started the year at 157 pounds where he went 6-4 … Dropped down to 149 and went 14-2 the rest of the regular season … Won the 149 pound title at the Franklin & Marshall Open after going 6-0, his first outing in the weight class.

2016-17: Went 12-5 and 3-2 in duals in his first season with the Hokies … Tallied seven bonus point victories … Went 5-0 and won the 157-pound title at the Edinboro Open … First dual meet win came against West Virginia’s Dayton Garrett in an 11-2 major decision … First career ACC victory was a 6-5 decision over Joseph Moon of North Carolina … Started at 165 pounds against No. 6 Nebraska in the NWCA National Duals.

2014-15 (Redshirt Year): Went 22-10 on the season, competing only in open tournaments … Wrestled most of the season at 165 pounds … Tallied six falls and seven major decisions … Fastest fall in 54 seconds … Faced one ranked opponent in No. 18 Harrison Hightower of Ohio at the Reno Tournament of Champions … Placed second at the Oklahoma, Joe Parisi and Missouri Valley opens … Produced third and fourth finishes at the Roger Denker Open and the OCU Open, respectively … Also competed in the Bob Smith Open and Reno Tournament Champions.

High school: Graduated from Bismarck High School in 2011 ... Compiled a 200-22 record under the direction of Jeff Schumacher and Scott Knowlen ... A four-time North Dakota state champion ... Was a 2x Junior National All American and was a Junior Greco-Roman National Champion!! 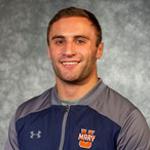 2019
Dropping down to 165 lbs., Team Captain and third year starter, Austin earned a 12-12 record at featuring three pins, and one major decision. Austin showed he was ready to compete at a high level through the season placing 5th at the Jamestown Open, and 4th at the NCAA Super Regional V tournament were her was one match away from going to the National Tournament.

2017
Austin started the year hot at 174 pounds winning the Yellowjacket Open hosted by RCTC. After sustaining a hand injury in the team’s home opener, he missed a large portion of the season. He returned to action in February in time for the team’s home dual against MSUM, where he went up 2 weight classes and notched a huge win for the team against MSUM’s Cody Anderson. He finished his season 9-9 going 0-2 at the Super Region 3 tournament. Proving to be a strong asset to the team, his peers voted him as freshman of the year at the team’s annual banquet.

PRIOR TO UMARY
Establishing the family connection for the University of Mary Wrestling team, Austin Eichmann is a two-sport standout from Hastings, Minn., where he wrestled and played football all four years while garnering several awards over the course of his career. Finishing with a 41-7 varsity record with 23 falls, Eichmann placed second at the Minnesota state tournament to wrap up his senior year at Hastings High School as a two-year team captain and earning the Most Valuable Wrestler award along with most falls. Eichmann ended his career with a 129-52 record with 55 falls and is very familiar with top competition as he placed sixth at the state tournament his sophomore year. Eichmann was named to the All-Conference team all four years in high school and also took home two All-State selections after his top finishes as a sophomore and senior. As a team captain, Eichmann helped lead Hastings High School to a Section Three championship in addition to three consolation championships at the state tournament. The son of David and Andrea Eichmann, Austin plans to study athletic training while attending the University of Mary.

Micheal Elliott, a 2019 graduate of Appalachian State University and is also on the University of Mary coaching staff.

During his time at Appalachian State University, Elliott earned the “All for App” and Most Improved awards. Elliott excelled in his senior year, wrestling at the 165 lbs. weight class, he recorded a 23-12 record for the season. He received national ranking status in the NCAA D1 polls and was named SoCon wrestler of the week after strong performances with individual wins of opponents from the University of Ohio and Oklahoma. Elliott was the SoCon runner up at 165lbs, which helped App State Clinch a third straight SoCon regular season title.

Elliott is originally from Jefferson, North Carolina where he attended Ashe County High School. Elliott also coach at Ashe County High School in the 2019-2020 season. For the Huskies, Elliott was a four-year starter, four-time regional champ, four-time state placer, and capped off his senior year with a state title. He finished 5th, 3rd, 2nd, and 1st his senior year. Micheal became his high school’s all-time career wins record holder with 159 wins and only 26 losses, a record that he still holds today.